Here’s a bit of news that will grab attention. The Industrial Development Board is working with a company that’s projecting to bring 410 jobs and millions of dollars in annual revenue to our community.

This is a super-secret company that officials don’t want to name for fear of losing the deal.

“This is by no means done,” said Industrial Development Board executive director Don Alexander. “There are still other communities in contention so we could lose out.”

Don made those comments Thursday during a specially called IDB meeting to discuss possible incentives for this company. Warren County appears poised to land this one.

“I’m not a big fan of incentives,” said Don. “But if we don’t provide incentives, we can’t compete with other communities.”

The company is projecting a total economic impact of $720 million over a 20-year period and is asking the IDB for a few concessions. I won’t get into the details and all the specifics because it can get boring and somewhat confusing, but IDB members took a vote that says, essentially, they will help this company in any way they can.

“How do we say no to this?” asked IDB member Ryan Lorance. “This is a no-brainer.”

Other board members seemed similarly giddy about the prospect of generating new jobs. The measure to help this company passed unanimously. IDB attorney Mike Corley, a new elder at Westwood Church of Christ, noted the wording would state the board would help the company “to the limits of our authority.”

I’ve covered local business news for quite some time and you’d have to go back decades to find a company that’s created 410 new jobs in Warren County. That’s a whole bunch of jobs and a huge payroll to meet so it would no doubt be a huge benefit, provided these are high-paying jobs.

Not all jobs are necessarily beneficial. If you’re only paying $10 an hour, chances are government programs will be needed for that person to survive because that’s not a living wage. That person isn’t going to be dining out and buying new cars on $10 an hour.

But if you’re going to be paying $25 an hour, chances are that person will have some discretionary income to spend. That person can eat out, go to the movies, and buy a few fancy gadgets to stimulate the economy.

Don says these would be good-paying industrial jobs. We can keep our fingers crossed this will come to fruition.

Medley’s Diner owner Billy Medley had an interesting take when I called him Friday to ask about his restaurant being placed on the market.

Medley’s Diner is currently being listed by Coffee County Realty & Auction for $2.5 million.

“You can’t win the lottery if you don’t buy a lottery ticket,” said Billy in explaining his reason for listing the business. “The real estate market is so crazy right now, we decided to throw it out there and see what happens. The purpose of listing something is to test the waters and see what happens.”

Billy and his wife Laura have been in the restaurant business for over 30 years and have built a strong following at that location in Morrison. Billy clarified the restaurant is on the market but said it will not be closing.

“We’re not going to shut down a million dollar business,” said Billy. “That would be crazy. I don’t really look for anything to happen, but who knows. Stranger things have happened.”

Morrison is in position for tremendous growth if hundreds of new townhouses are constructed across from Prater’s BBQ as real estate developer Amnon Shreibman has planned.

“I’ve heard it’s going to be 150 new homes and I guarantee you those people will have to eat,” said Billy. “We have good food at good prices.”

Medley’s Diner at 7783 Manchester Highway was built six years ago and is a 7,296-square-foot building. It’s touted as a “lucrative business” that’s still open and operating on the Coffee County Realty website.

In addition, there are three manufactured homes, a pond, and a chicken coop on the 5-acre property. The largest of the manufactured homes is only 1 year old, according to the listing, and has over 3,000 square feet of living space with 4 bedrooms, 2 baths, and a large sunroom.

“This is a once-in-a-lifetime deal!” the realty company says. If you’d like to own Medley’s Diner, a piece of Warren County history, give Coffee County Realty a call. Tell them you read it in Business Pulse and perhaps I’ll get 1% commission.

I figure I’m like most homeowners in that stuff tears up and breaks down around my house. When that happens, I have to fix it.

My first reaction is to call someone to do the repairs, but I’m all too familiar with calling people who will show up at 10 a.m. on Tuesday who never show up on Tuesday. Or Wednesday. Or ever.

So I’ve learned to fix most of the things that break around the house myself. A big thanks to YouTube and the group of people who film themselves making repairs.

For those who don’t want to do it themselves, there’s a new handyman in town. George Stinnett has opened GWS Handyman Services and he has more than 20 years of experience in home repairs.

Moving furniture in the micro-world

Mon Jun 13 , 2022
Schematic illustration of the moiré pattern evolution under the influences of external forces and torques for a circularly shaped colloidal cluster interacting with a periodically structured surface. Regions where the particles of the cluster are close to the bottom of the wells of the patterned surface appear as dark-coloured regions […] 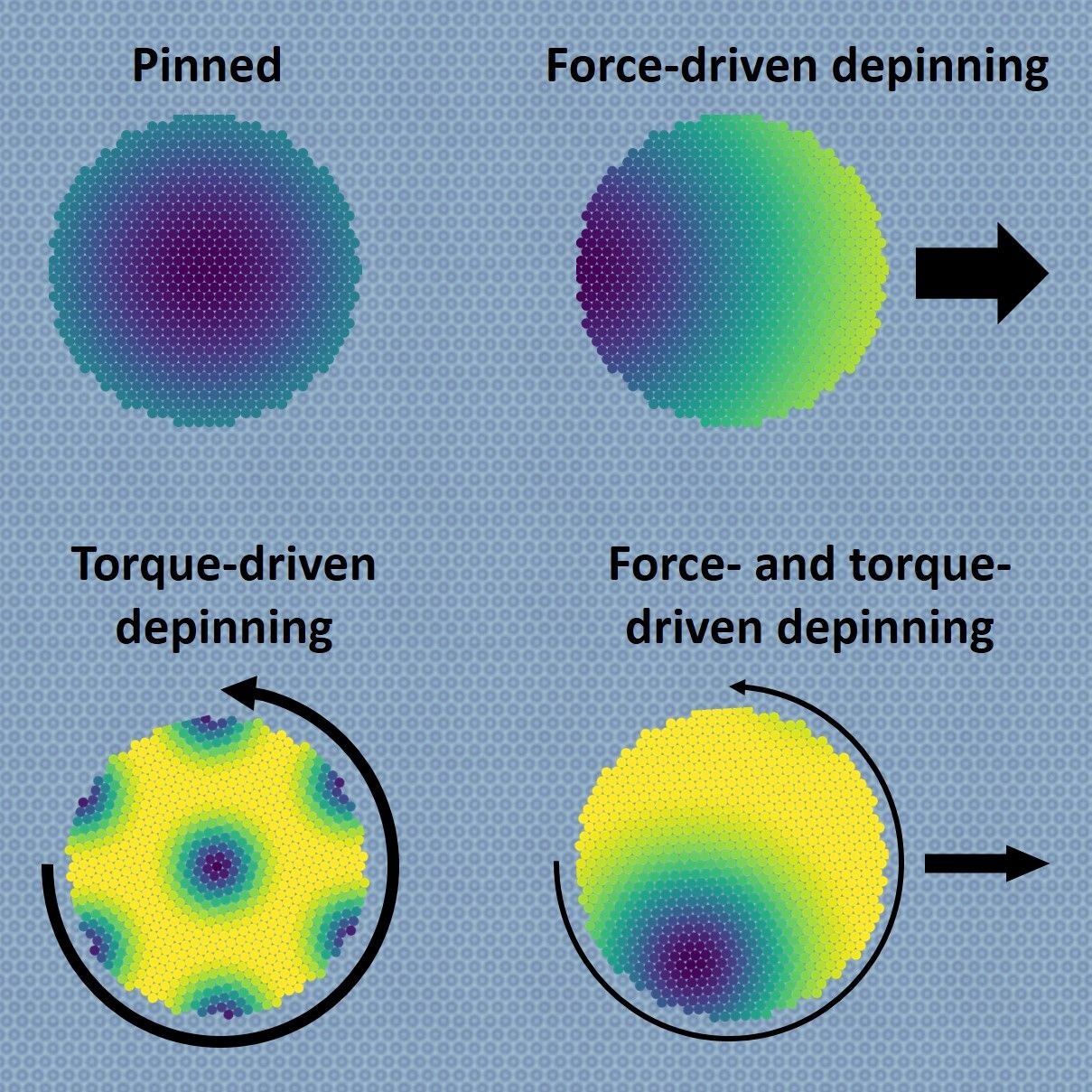