When most students signed a lease at The William apartments, they were promised a brand new luxury student apartment complex full of state-of-the-art amenities, a location walkable to campus and “design forward student living.”

The complex, located on North Finley Street, ran a strong social media marketing campaign after the creation of its Instagram account @lifewithwilliam_ in April 2021. Using an array of giveaways and a feed full of brightly-filtered photos from University of Georgia students, the complex highlighted fun college moments to fuel its promotion.

But as the end of the 2021-22 school year approached and summer began stretching thin, students grew concerned over the pace of the apartments’ construction, which many residents said appeared to be behind schedule.

Now, a few weeks into the fall semester, student tenants still have not moved into the apartment complex. Many are displaced among downtown hotels, distraught from months of what they have called a lack of communication, transparency and honesty.

Jake McGhee, a junior political science major at UGA, said he chose The William because it was significantly cheaper than other downtown studio prices and the walking distance to campus was very appealing.

But McGhee said he and his parents grew increasingly concerned with the timing of move-in and the ongoing construction, and were assured by the then-manager, who left in April, that the project was moving along and would be completed by July.

McGhee, who signed his lease early in December 2021, said he made sure the lease included a provision for housing in the event of a delay.

One version of a lease — of which residents said there are multiple — obtained by The Red & Black, includes a section for delay of occupancy and displacement under the construction addendum.

Under the displacement section, the lease states “[the] owner, at owner’s sole option, shall transfer Resident to another apartment within the apartment community that is not affected by the repair, renovation, improvement or construction or shall provide appropriate comparable accommodations for resident.”

While appropriate comparable accommodations are not defined in this section, under the special provisions section, it states that the complex is not liable for any construction delay and hotels with a monthly rate comparable to the unit rate will serve as “substitute living accommodations.”

Still, residents never expected to spend their first weeks of the semester living in hotels, with some paying for storage units to hold their belongings.

“I could have never imagined something of this magnitude,” McGhee said.

For some students like senior journalism major Morgan Quinn, the signing experience was different than that of students who signed earlier in the academic year. Quinn signed in July after another apartment fell through, and wasn’t surprised to hear of the first delay after seeing the construction site.

“Me and my family, when we signed, we were completely aware that it wasn’t going to be done [on time],” said Quinn, who has parents living in Athens. “My thought process was just, if we’re delayed two or three weeks, it’s not a huge deal to me.”

Wednesday, Aug. 31, a week before the original delayed date, the move-in was delayed once again to Sept. 18. The complex cited required inspections as the reason, according to an email obtained by The Red & Black. The residents were given until 2 p.m. on Friday, Sept. 2 to choose an option: find accommodations and receive a $500 gift card and $30 per diem or live in a hotel room, possibly with another resident, receive the aforementioned deals and 20% off September rent. Those staying with another resident will receive a $1,000 gift card.

Instead of the previously scheduled move-in date of Sept. 7, the complex said in the email that furniture installation should begin then.

While many students in Athens had already settled into new apartments and begun to prepare for the fall semester, The William tenants have continued to live in hotels, unsure of their housing for the current school year. According to an initial email from The William on July 26, tenants were given the option to get out of their lease after the first delay but were told they needed to sublet their spot.

Fifth-year computer science major Hayden Odum said he and his girlfriend were drawn to the complex as its distance was marketed as being just a few blocks away from UGA’s campus. Now, they are living together in a hotel.

“I’m taking 17 hours of senior classes, I’m also in [the Redcoat band], so that cuts back a lot of time that I can spend after school hours,” Odum said. “It’s definitely an additional layer of stress, I’ve missed classes because of having to deal with issues.”

This sentiment has been echoed by several other students as well, especially following the leasing office’s new, limited, 10 a.m.-1 p.m. office hours and sporadic email communication.

“I fell behind a lot the first two weeks of class because I was so consumed with talking to the leasing office, talking to corporate, talking to all these different organizations trying to find answers … or if I could get out of my lease, talking to lawyers,” McGhee said.

Odum expressed his frustrations more toward Asset Living and their management of the property, but said he believes those working in the office are doing the best they can with what they are given, and can really only act in an “administrative capacity.”

“It’s been more a lack of communication from corporate,” Odum said.

After notifying residents of the first delay, the complex offered them gift card options, as well as $30-a-day payments, according to an email sent to residents.

Residents have listed issues with the incentives. The gift cards, which are valued starting at $500 and expire within the next six months, were difficult to access and are essentially only usable for online purchases, McGhee said.

The daily installments of $30 have also been “sparsely received by people,” Odum said, who has been using the money to eat out nearly every meal because he has no kitchen to use. Like the gift cards, they are also difficult and restrictive to access.

“I guess if you eat Wendy’s three times a day, you might be able to be under $30. But the three meals a day, $30 just isn’t really cutting it,” Odum said.

One of the biggest issues in a situation where tenants feel trapped by their lease is confusion in the terms of legality with such a dense document, according to UGA School of Law Professor Elizabeth Grant. They are often written by lawyers who have “tried to think about every possible thing that could happen in the landlord-tenant relationship,” Grant said.

The language of the lease has more weight legally than any verbal promise, Grant said. It is the lease that courts will turn to in any dispute.

The lease spans nearly 50 pages and lists several addendums, with legal jargon that people may find difficult to decipher.

“Many of the landlords that students will be dealing with in Athens are going to be complexes, corporate landlords or landlords that own many units. And so having a lease like this, that is 50 or more pages … is very typical,” Grant said. “[The] takeaway is thinking about how could our state, our city, our country, how could we help tenants be better informed consumers and better protected? Because there really is a power imbalance.”

The second delay was unsurprising to many residents who drove by the construction site in the days and weeks before Aug. 31. While the option to stay in hotels still stands, students are left in a state of limbo.

Odum said he has been looking at other options for a while and has another apartment for him and his girlfriend lined up.

“Living in a hotel is kind of getting stale. It’s taken a big impact on our mental health,” Odum said.

McGhee is choosing to stay at the hotel after a backup plan fell through.

“If they had told us in July the real scope of the delay, I would have certainly found something else when other things were available,” McGhee said.

Building costs have soared. Is it time to abandon my home renovation plans?

Fri Sep 9 , 2022
Australia’s appetite for home renovations remains strong, with around A$1 billion worth of alterations and additions to homes approved in July. But rising interest rates and shortages in labour and material may have some would-be renovators wondering: is this still a good idea? Here are five questions worth considering. Read […] 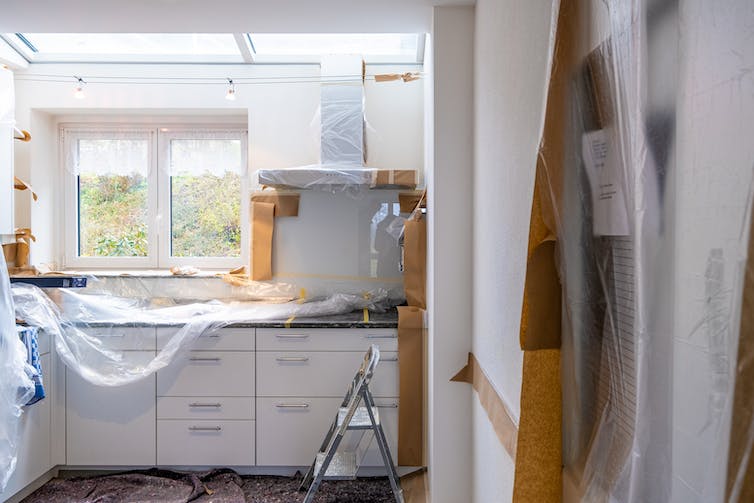