Skip to content
Sometimes, a dream home isn’t the one you purchase, it’s the one you make.
For the Wiltgen family of Spillville, that couldn’t be truer. When Kristie Wiltgen and husband, Ryan, bought their house in 2000, they knew from the start that there were going to be updates, but they would need to take them on “in phases.”
“It still had the original green slate siding and original windows,” said Kristie of the 1952-constructed home.
The first large project came in 2002 when they added a front porch. Then, in 2005 they added a 24×24 addition, including a finished basement. From there, they began their exterior remodeling project in 2018, the biggest of the tasks so far. This project included a garage remodel, replacing all the original windows, putting on new siding, new gutters and a new roof. The garage was taken from a small one-car garage and breezeway and transformed into a 27×34-foot heated garage that is now connected to the house’s original roof line.
And, as if that wasn’t enough, in March 2020 the Wiltgens began their pièce de resistance: the kitchen remodel. As Kristie put it, “Our exterior remodel and most recent kitchen remodel were something we dreamed of when we initially bought the house, and 20 years was long enough to dream, so we finally decided to bite the bullet.”
And did they ever. The plan from the beginning was to strip everything to the studs – including the ceilings in the hallway, living room and front entryway – then knock down the walls to open the staircase, replace cabinets, add a pantry and move the whole kitchen to create a “complete open concept living area.”
In the plan, Kristie did lay out a few “must haves.” She said, “Having a pantry was a must! Also, more storage and functional cupboards and drawers were a must. Previously, we were storing perishables in a small hutch and on some shelving in our basement. I had additional kitchen gadgets in about three different places including our basement which wasn’t convenient.”
Once they got started, the Wiltgens found themselves fully-immersed in the chaos that comes with remodeling on such a grand scale. “There was no choice but to have the mess inside, where as a family of four we needed to function every day. When Kristie left [for a work conference], she had a kitchen, and when she returned four days later, it was completely stripped to the studs,” said Ryan.

Pandemic remodel
Then, two weeks into the remodel, the world shut down. COVID hit, and with it brought Kristie into the world of working from home. The problem? Her home was in pieces. “It looked like a tornado went through our house, and while leaving for work every day was going to keep my sanity during this remodel, I didn’t have an office to escape to. I worked for about two months in a corner of our basement on a cardboard table,” said Kristie.
The rest of the family was inconvenienced, as well. “While most things were shut down, we spent all our time at home without a kitchen sink or dishwasher. We used paper plates and plastic silverware most of the time. Our oven and refrigerator were functional in our living room for a while until it got a little warmer outside, and we decided to make a makeshift kitchen in our garage. We moved all our appliances and kitchen table out there and instead of doing dishes in the bathroom tub, we washed and rinsed the dishes in plastic totes in the garage.”
However, despite the pandemic, the Wiltgens kept moving. In fact, they claim that it kept them ahead of schedule! “The remodeling moved along because when everything shut down in March 2020, we had nothing else to do but work on the house. Easter weekend, instead of egg hunts, services at church and family gatherings with our extended families, the four of us instead spent it painting our entire main level and ceilings,” said the Wiltgens. “It was family bonding!” they joked.
And they aren’t kidding, either. The Wiltgen family took it upon themselves to complete as much of the remodel as they could themselves, including painting, wiring, demolition, removing old siding and windows, constructing the locker unit they put in the front hall and installing, staining and varnishing the hard wood flooring.

Renovation advice
Now that the project is complete, the Wiltgens have advice for home renovators. “Our advice is to push through it. Kristie likes things kept in order, so it was a little stressful,” said Ryan. “And Ryan can handle things being in disarray and in construction mode much better and can be more laid back about things. He had to remind me it wasn’t a mess, it was progress,” said Kristie. “The inconvenience only lasts for a little while in the grand scheme of things, and the outcome is so worth it,” they agreed.
Additionally, they recommend looking at other homes – both new construction and remodels – to get ideas. “We looked and drove around a lot looking at what we like. We took pictures of the outside of strangers’ houses for ideas or color schemes of siding we like. Talk and visit with people you know that recently completed new construction and remodel projects. Talking to a designer is also a great idea because they will think of things you may not have,” said Kristie.
Looking back on it, Kristie is glad that she followed that last piece of advice as well as she did. “We love the kitchen layout with the pantry and how our house is so open now. When we met with Kari [Steinlage, of K.L. Design], she gave us many options to think about. We probably had plans for about six months, looked at it multiple times and changed it a few times before we finally decided and started. Originally, we were going to section off our front entry area to have a separate mud and laundry room, but we decided to keep everything open and build a locker unit instead. It was exciting to see Kari’s 3D images and it put our minds at ease that the finished projects were going to turn out just as we envisioned.”
Now, 22 years from the original purchase, the Wiltgens can finally say that they are living the dream, in their dream home. And this was not a dream they bought, it was one that they made. Through time, effort, family and what can only be imagined as buckets of blood, sweat and tears, the Wiltgen family have made their dream (home) come true.

Fri Apr 22 , 2022
The Tandem Shower, from Seattle-based Boona, offers the ability to easily install dual showerheads running off the same water line. (Boona Photo) Brett Skaloud and Jeff Feiereisen both worked on some of the most cutting-edge technology ever created at Amazon, with specific focus on helping to start the company’s cashierless […] 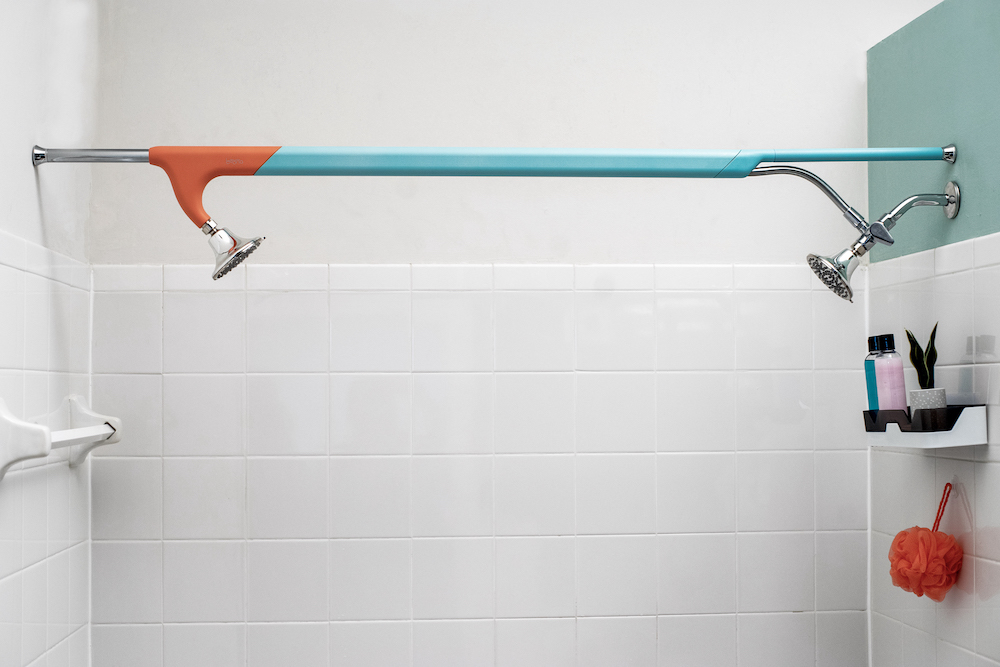