With the recent announcement that the state Department of Housing and Community Development will support the project with federal and state low-income housing tax credits and subsidy funds, a key component to completing the project is in place, according to New Bedford Development Corporation President Steven Beauregard.

Beauregard said the new construction will be a five-story mixed-income high-rise at the corner of Union and North Second streets. The rest of the project will be an adaptive re-use of the property. The project will provide rental housing for area workers.

“It’s a workforce development project,” he said. “We’re trying to get workers who are making say $50,000 a year into nice housing downtown so they can live and work down here. That’s really the goal.”

The Moby Dick Building will have eight units in it, and the remaining units will be located in the five-story building with an open floor plan on the top for renters who want to sit outside downtown and look out over the water.

The New Bedford Development Corporation joined forces with co-developer E3 Development, LLC, led by president and founder Eliza Datta due to her experience with this kind of mixed-use development project in Greater Boston, Beauregard said.

Datta founded E3 Development in 2018 to pursue real estate development opportunities and related advisory roles, with a focus on mixed-income residential and mixed-use projects in urban and other transit-oriented locations.

Project costs have increased over past few years

Beauregard said the approximately $24 million project started out four or five years ago at approximately $17 million, but the cost has risen due to inflation, labor and construction costs.

The cost of the rental units is expected to rise with a 15 to 18-month construction schedule from the time shovel goes into the ground until the units are occupied, Beauregard said.

The area median income, or AMI, will determine whether families are eligible. The units will be reserved for households earning from 30 to 100 percent AMI, Beauregard said.

‘The New Bedford we aspire to build’:What Mayor Mitchell said about the state of the city

The project will preserve the historically significant Moby Dick Chandler Building, originally constructed in 1916, it is located in the Bedford Landing Historic District.

Beauregard said it has been called the Moby Dick Building for about 100 years, and supplies that belonged to the Moby Dick gift shop used to be stored there.

The intent is to retain and preserve the historic nature of the property’s facade and replace the existing storefront with a more historically appropriate storefront.

Seven other dilapidated buildings just outside the historic district have been knocked down, leaving a fenced-in vacant lot. The property has been vacant about 20 years. Beauregard said they hope to begin construction in the fourth quarter of 2022.

Approximately $63 million in subsidy funding has been awarded to 15 projects in 14 communities for affordable housing production through the Department of Housing and Community Development.

‘A risk a lot of people take’:Why undocumented immigrants drive without a license.

“With this round of affordable housing awards, we continue to expand the Commonwealth’s portfolio of new housing units to meet the needs of households of all income levels,” Gov. Charlie Baker said in a news release. “As we continue to tackle the state’s housing crisis, these projects will result in meaningful progress toward our goal of enhancing access to safe, quality, and affordable housing.”

The federal and state low-income housing tax credits awarded by DHCD are expected to generate over $200 million in equity to support new construction and rehabilitation of existing housing.

Standard-Times staff writer Kathryn Gallerani can be reached at [email protected] Follow her on Twitter: @kgallreporter. Support local journalism by purchasing a digital or print subscription to The Standard-Times today.

Things to consider for a partial kitchen remodel | Lakeside News

Tue May 3 , 2022
Rollout shelves are a perfect upgrade for lower cabinets where items get lost in the back. When it comes to updating your kitchen, not everyone has the budget (or the time or patience) for a full remodel. However, there are ways to upgrade your kitchen without going through a full […] 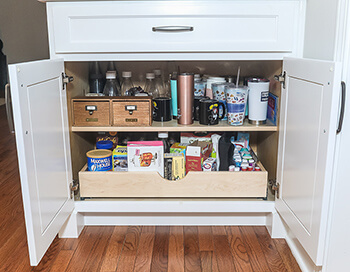