MIAMI – People living near Una Residences, a luxury condo project under construction in Miami’s Brickell neighborhood, shared pictures on Sunday of what appears to be pooling at the site.

“He told us that there was rain water — it was rain water. It did not rain here. That is a lie,” one resident said. “And we are calling out the lies people are extremely tired of hearing from our city officials that we pay for.”

After witnessing water upwelling into what has been described as Miami’s most expensive and deepest underground parking garage during its excavation phase is October and then another groundwater breach at the project site in November, residents told Local 10 News Sunday that they were worried the water could be the result of another breach.

Christie Tasker said she and other Miami residents are deeply concerned.

When she thinks about what is going on at the Una Residences construction site, she said she can’t help but think about last summer’s Surfside building collapse. She also worries about the manatees in Biscayne Bay.

Developers tasked Civic Construction Company with an underground garage below the waterfront 47-story tower with more than 130 units. Through her window, Tasker saw the excavation and the water intrusions.

“This is very low, located very close to Manatee Park, and there are absolutely no manatees … families used to be able to come to see manatees almost all times a day and we haven’t seen manatees in months,” Tasker said.

A spokesperson from the project’s general contractor sent Local 10 News a statement on behalf of William Real of Civic Construction. The statement said while their team is aware of “social media speculation” about the pooling of water, they said it was the result of “Saturday’s concrete pour and is normal at a project of this size,” adding that on Sunday evening there was “six inches of water pooling, and it is slowly draining. Representatives of Miami-Dade County’s Department of Environmental Resources Management (DERM) were present at the site today and confirmed that construction is clear to proceed as planned.”

A spokesperson from Miami-Dade County’s Department of Environmental Resources Management (DERM), which investigates received water quality and environmental concerns, told Local 10 News that a DERM inspector who was at the site Sunday was “told by the superintendent that they were pouring out the concrete foundation and water started coming in. They have been pumping the water into three large holding tanks on site.” They said there “is no discharge into the Bay or stormwater drains. As such, there is no environmental violation.”

“They did absolutely nothing more than visually inspect a situation that should have been inspected below the surface,” Tasker said.

Local 10 News reached out to City of Miami building department officials on Sunday evening and again on Monday with the residents’ concerns but have yet to hear back. The City of Miami oversees building permitting.

“It is good that communities surrounding this area are paying attention,” he said. “The presence of water, especially when we are digging, doesn’t necessarily indicate a problem or failure.”

He did say nearby unit owners could continue to pay attention to anything that is happening “on your property that might appear as a structural concern,” something building managers can bring to the attention of the project’s engineers to make sure everything is going “according to plan.”

It will also include a three-level subterranean basement, “which will become Miami’s deepest, most expensive underground garage.”

In October, residents who live nearby grew concerned when they began to see water upwelling into the excavation site. A similar situation happened in November. Both ground water breaches were capped, according to the spokesperson for the project.

According to ConstructionDive.com, project leads were using a “deep-soil-mixing construction process to create a waterproof bathtub-like structure that protects the building’s concrete mat above the tub from groundwater and forms the base of the garage.”

Then in November, Mandy Karnauskas, who lives in Brickell Townhouse, which is next door to the Una Residences under construction, told us they can “see the ground actually moving, a piece of our property is sinking and our little tiki picnic huts are starting to keel over.”

At the time, the project’s general contractor told Local 10 News that the water was contained to the construction site and “there is no evidence of impacts on surrounding properties,” but now Karnauskas is not so sure.

She said she received an email in November from the management company of her building that said the property is “starting to have some impacts.”

In that email, pictures of the building’s tiki huts were wrapped in caution tape and what was described as wood degradation in the pole base. Soil erosion, the email said, has caused the brick pavers in the area to shift, presenting a safety issue. The erosion was caused when water was extracted from the pit, the email stated.

“What are the potential impacts of this construction on our building’s foundation?” Karnauskas wondered.

The city did issue a temporary stop work order in mid-November so two subject matter experts  in “deep basement construction/high rise buildings” could independently “assess the site and adjacent structures to determine if it was safe for construction to continue.”

City officials said that included a geotechnical engineer and a structural engineer with expertise in vibration analysis. In December, the City of Miami Building Director Ace Marrero told Local 10 News in an email that the experts recommended “additional bracing…on the parking garage immediately adjacent to north of the Una site.” In mid-December, the city’s building department amended the stop work order to “allow for limited work to continue only on the fully excavated portion of the site.”

Rachel Silverstein of Miami Waterkeeper notes that: “It is very difficult to do construction underground in South Florida because we have very porous limestone rock beneath us. We also happen to have a shallow water table, you only have dry rock for a short time before you hit water, so it can be very complicated to construct underground parking here in Miami.”

This is one of the reasons she said you don’t see basement construction in South Florida homes like in other parts of the country.

The Una Residences underground garage may consider itself the deepest, but building subterranean garages is not uncommon for Miami, said Miami Commissioner Ken Russell, who pointed to the recently completed underground garage at Brickell City Center.

Local 10 News asked Russell about whether, at a time when the city is already grappling with the impacts of sea-level rise, it made sense to continue permitting development projects like this one.

“This is a standard [engineering] process,” he said. “It just has more challenges here in Miami with porous limestone and aquifers and bodies of water.” He said as long it has been deemed “safe” “the city will continue to permit these.”

That is because, Russell said, “in the Florida building code this is acceptable,” adding, “my job here is making sure they are meeting requirements of permits from an environmental perspective.”

Wed Mar 16 , 2022
PETOSKEY — The Home Builder’s Association of Northern Michigan’s Regional Home and Outdoor Living show is making its return for its 44th year after being canceled two years in a row due to COVID-19.  The theme of the show will be “new beginnings,” and it will take place from 11 a.m. […] 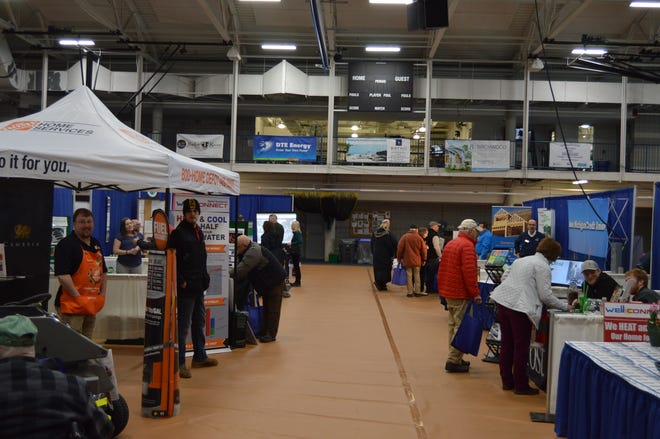