It’s a troubling turn of events for a once celebrated business. I first visited CCR four years ago, when owners and husband and wife duo Jason and Kelsey McGinnis operated their new business from a modest warehouse in St. Francis. A relocation to an impressive spot on Water Street in Milwaukee’s Historic Third Ward occurred soon thereafter, and visitors could occasionally catch a glimpse of their firstborn playing quietly between a pair of newly (and beautifully) reupholstered midcentury modern sofas.

An additional, larger warehouse space housed a vast selection of vintage and consigned midcentury pieces, ready for custom restoration or upholstery, and an in-house freight and shipping division met the needs of an industry riddled by the pandemic and supply chain issues. This young, Milwaukee-based couple had built a seemingly flourishing retail and furniture restoration business while juggling new parenthood and entreneurship. What’s not to love?

The answer to that question has, unfortunately, become quite complex over the last few months. I noticed that CCR’s Water Street storefront was empty in early January, and, just days later, I saw an Instagram story from industry-renowned midcentury modern furniture dealer Herman Wakefield. He cautioned against doing business with CCR, noting that people had contacted him privately “about money owed or product not delivered.”

The response was startling. Dozens of people, from vendors and designers to midcentury devotees, shared their stories – each laced with tales of fraud, empty promises, theft and unresponsive inquiries. One local graphic designer said CCR sold her art prints for years, but she had not received a single payment from the McGinnises. Milwaukee makeup artist Maggie Kerr, who reposted the story, said she was promised restoration of six chairs, but months went by without the work being performed. CCR ultimately refused to refund Kerr nearly $2,000 when the chairs were eventually returned in their original condition.

There’s even a private Facebook group, named Scam City Restoration, for those who fell victim to CCR’s alleged fraudulent behavior.

“I’ve been dealing with Jason McGinnis’ eternal lies about a pair of my rosewood Milo Baughman case sofas that I consigned three years ago,” Chicago-based midcentury modern dealer Karen Friedberg posted in the group. “The combined value of the two sofas is between $8,000 and $10,000 once reupholstered. The agreement we had was that CCR would refinish and reupholster them, but after nine months of failing to do any work on them, I told him I’d like to take them back.”

Phone calls and text messages went unanswered, says Friedberg, and then, in late 2019, CCR posted one of the newly refurbished sofas on their Instagram page. 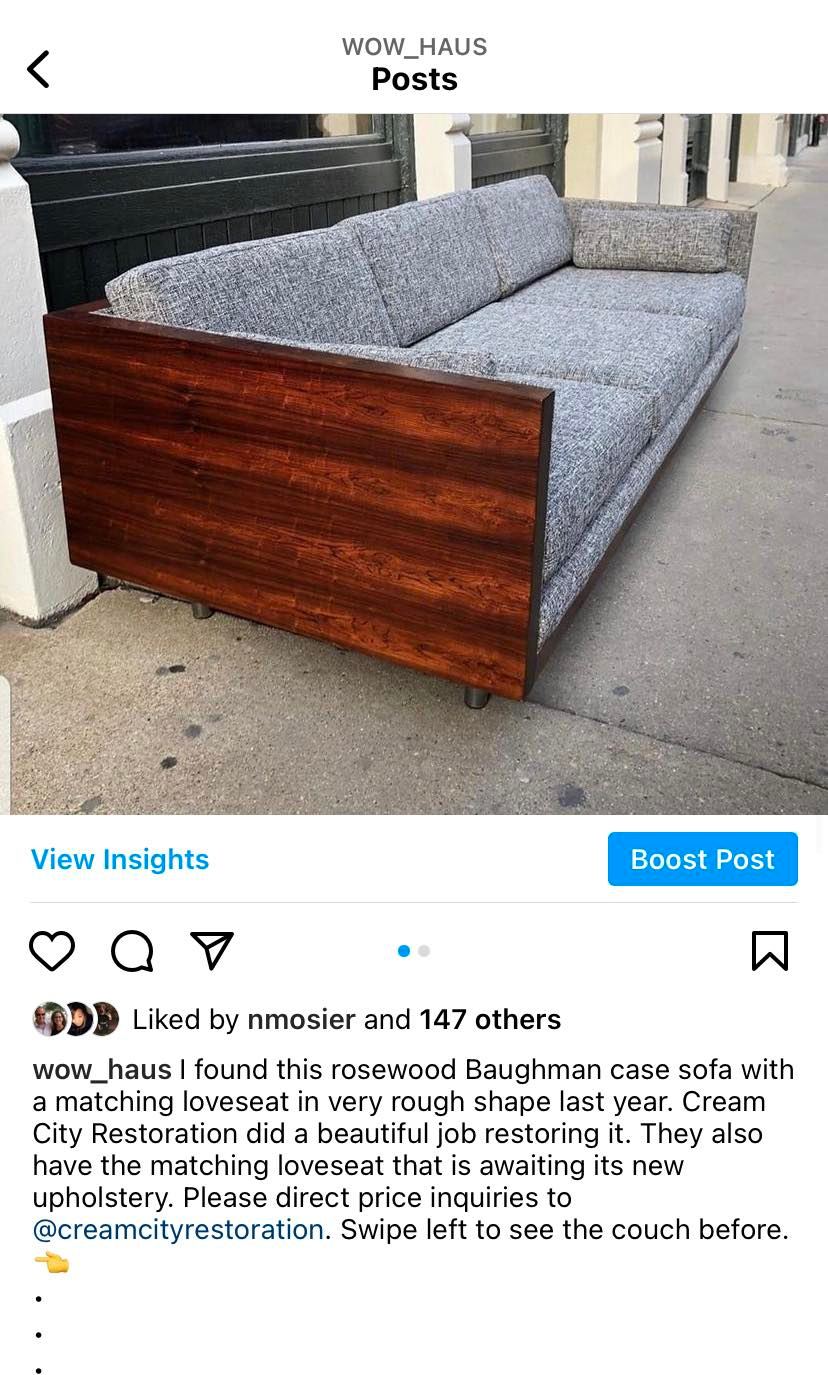 Friedberg spent the following two years trying to reach Jason, and, after years of unresponsiveness, the two sofas were returned to her in February – but as “a pair of bones, completely deconstructed,” she says. “I believe his entire business is based on theft,” Friedberg tells me over the phone weeks later, audibly distressed by the situation.

It was Freidberg who formed the private Facebook group, too, which currently boasts more than 25 members. “It saddened me to read people’s stories about their items being taken and not returned,” notes group member Randy Pejovic. “Every item has a story, and some (items) can have real meaning to a person.”

A former CCR employee who worked as a floor salesperson and storage manager in 2018 says she cried on the phone with a distraught customer after the McGinnises went silent after losing a family heirloom the customer wanted restored. “Overall, my time with them was not a good experience,” adds Dayle, who asked to be identified by only her first name due to privacy concerns. “Their morally dubious business practices created a highly stressful and traumatizing working environment.”

Liz Zaret, a California-based interior designer, laments how CCR canceled her freight service order – the cross-country transport of a 500-pound table – after she asked for insurance and tax ID documentation, and then failed to refund her $1,000 payment until she threatened legal action.

Customer issues aside, the McGinnises and CCR face mounting cases of tax delinquency. The state Department of Revenue has filed nearly over 20 cases dating back to 2019 against CCR, most of them claims of delinquent tax warrants, indicating that CCR has not paid its taxes in two years. The company also has an F rating with the Better Business Bureau. And, despite the robust legal record, CCR has received noteworthy – and praiseworthy – media attention over the last few years, including accolades from this magazine.

Milwaukee Magazine attempted to contact the McGinnises for comment numerous times, but with no success. Both their Facebook and Instagram accounts were deleted, and the phone number leads to a recorded message, directing all inquiries to email. “Due to our staffing shortage, this is not a working phone number. Email is our only form of communication available,” the recording adds. “Voicemails, texts and messages via this phone number or any other form of communication will not be responded to. Thanks for your patience and understanding in these unprecedented times.”

'Be very patient': How to navigate the months-long construction project which closes the Thor-Freya exit on I-90