TEEN Mom 2 alum Chelsea Houska has begun shooting her HGTV home renovation show after she was ripped for having “no experience.”

The 30-year-old is making her return to reality television after quitting the MTV show.

Chelsea took to Instagram on Friday to share a photo of herself and husband Cole DeBoer, 33, on set of the new show.

The couple happily smiled for the camera as they posed with their arms wrapped around each other.

Shortly after Chelsea shared the Instagram post, her fans and friends rushed to the comments section to show their support. 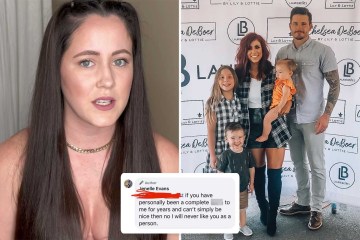 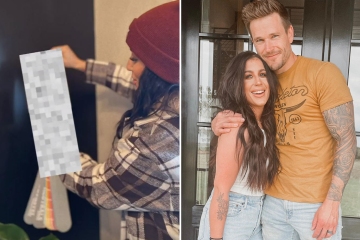 “I’m gonna tell my kids this is Chip and Joanna Gaines,” one fan wrote referring to one of the network’s most notable personalities.

Another chimed in: “You’ve come so far since I watched our cry on your dads couch, so happy for you and all your blessings.”

Chelsea continued to document the first day on set by sharing a photo of a camera and a clapperboard that featured the show’s name, Farmhouse Fabulous, on her Instagram Story.

Most read in Entertainment

It was revealed back in February that Chelsea and Cole have scored a brand new reality show on HGTV.

The series, which is set to debut in 2023, will follow the pair as they help families renovate their homes.

Shortly after news of the show was announced, MTV fans rushed to Reddit to admit they weren’t excited about the series.

While sharing their reactions to the show, many fans argued that Chelsea and Cole don’t have enough experience to help others build their dream homes.

One person wrote: “So, what is their show actually going to be about? Are they going to renovate/style homes every episode?

“Because, while their home is nice, it’s only ONE home and it took them a while to cultivate the style and touches that they wanted for it… I know Cole is handy, but nothing about them screams that they know what they’re doing with designing a home lol.”

Another added: “Lame. I have no interest in watching but she’ll probably get a s**t-ton more subscribers for this (borderline boomer types).”

Meanwhile, other critics slammed Chelsea for signing onto the show after she quit Teen Mom 2 for “more privacy.”

Some fans called Chelsea a “liar,” with one person writing on Instagram said: “So leave one show for privacy and whatever else she complained about to go on another?”

Another added: “Well that’s not contradicting to why you left Teen Mom at all,” while a third chimed in, “So she quits Teen Mom to take Aubree off TV for more privacy and now she’s going back on TV? Ok…”

However, the mother of four did not receive rave reviews from fans after its completion.

Chelsea and Cole faced backlash about their home throughout the building process last year, which was documented on their home’s Instagram page.

We pay for your stories!

Do you have a story for The US Sun team?