A lawsuit challenging the $100 million project to improve the Bayfront Parkway is proceeding in federal court in Erie, but it no longer includes a request for a preliminary injunction to halt construction.

The case’s two plaintiffs — the Erie branch of the NAACP and the environmental advocacy group Citizens for Pennsylvania’s Future, known as PennFuture — withdrew their injunction request on Friday, less than two weeks after they filed it.

The withdrawal came after U.S. District Judge Susan Paradise Baxter assured the plaintiffs that she will rule on the underlying lawsuit before the anticipated construction date, revised to Jan. 9, according to an order Baxter issued on Friday. Baxter in the order granted the plaintiffs’ motion to withdraw the injunction request, and she canceled a hearing she had scheduled on the request for Tuesday.

Baxter issued the two-page order after she held a telephone conference on Friday with the plaintiffs and the defendants, the Pennsylvania Department of Transportation and the Federal Highway Administration.

The plaintiffs requested the preliminary injunction on Aug. 29, based on what they said in court records was the latest construction schedule from the PennDOT. That schedule called for preliminary construction to start in November.

The plaintiffs said they wanted the injunction to avoid construction starting before Baxter rules on the lawsuit. The outcome of the case could affect when and how the project advances.

“Any contract awarded by PennDOT will set in motion a governmental process that will be difficult to stop — what courts call the ‘bureaucratic steamroller,'” according to a memorandum the plaintiffs filed to support the request for the preliminary injunction. “PennDOT’s decision-making will then be prejudiced in favor of the Project, even if Plaintiffs prevail and the Court orders PennDOT to conduct a proper environmental analysis.”

Summary judgment ruling next for judge

The Erie branch of the NAACP and PennFuture sued in U.S. District Court in Erie in December 2020. They are claiming that the amount of public input on the parkway project has been insufficient and that PennDOT’s environmental impact study for the planned changes to the parkway was inadequate and violated federal law.

The plaintiffs are not objecting to a redesign of the Bayfront Parkway, they said in a court filing. But they said they disagree with the project as planned, contending it fails to achieve “what Erieites have been asking for — a pedestrian-focused corridor linking downtown to the waterfront.”

Before the project, as currently planned, can proceed, the plaintiffs want Baxter to order PennDOT “to conduct a proper environmental analysis” and to hold a “public hearing soliciting public feedback,” the plaintiffs said in another filing, the memo that accompanied the motion for a preliminary injunction.

PennDOT and the Federal Highway Administration are arguing they followed federal law in completing a reduced environmental review for the project. They are also arguing that PennDOT has held public meetings over several years to offer details on the project and receive public comments. PennDOT and the FHA opposed the injunction request.

Another response:Federal agency denies wrongdoing in response to lawsuit over Erie’s Bayfront Parkway

In her order on Friday, Baxter gave the plaintiffs and the defendants until Oct. 16 to file new motions related to summary judgment. She said any final responses to those motions must be filed by Nov. 23.

“The Court will rule on the new cross-motions for summary judgment no later than December 31, 2022, thus obviating the need for preliminary injunctive relief, as the anticipated Construction Start Date for the Bayfront Highway Project is January 9, 2023,” according to Baxter’s order. “Defendants have agreed they will not change the anticipated Construction Start Date to a date earlier than January 9, 2023, to ensure that this case proceeds according to the foregoing schedule.”

Competing interests over changes to parkway

PennDOT’s proposed changes to the Bayfront Parkway represent the biggest upgrades to the downtown highway since its first stretch opened in 1990. The administration of Erie Mayor Joe Schember is among the supporters of the project. It is designed to improve safety as well as access to the bayfront in the parkway’s central corridor — the section nearest State Street.

PennDOT plans to build dual-lane roundabouts on the Bayfront Parkway at Holland Street and Sassafras Street Extension and to build a pedestrian bridge over the parkway at Holland Street and in time at Sassafras Extension, when funding becomes available. PennDOT also wants to lower the parkway beneath State Street to improve pedestrian and bike access, and to extend walking and bike trails.

The Erie branch of the NAACP and PennFuture said they want the additional studies on the project to examine not only the environmental impact, but also how the project will affect those who live near the parkway.

In court records, the Erie branch of the NAACP and PennFuture contend that “high rates of impoverished residents and communities of color” live in the neighborhoods near the Bayfront Parkway, a situation the plaintiffs say requires PennDOT to “analyze potential impacts to those communities to ensure they will not be disproportionately and adversely affected by the project.”

The defendants are arguing such claims have no merit.

“The Bayfront Parkway Project will benefit the neighboring environmental justice communities by improving pedestrian and bicycle access to the waterfront from those neighborhoods at each of the three intersections,” lawyers for PennDOT said in a filing to support the defendants’ request for summary judgment. “The pedestrian bridges at the Holland and Sassafras Extension Street Intersections will connect the residential areas on the high bluffs above those intersections to the waterfront across the Parkway.

Tue Sep 13 , 2022
An Englishman was able to turn back time during a home renovation. While working on restoring a home in Birmingham, Scott Bevan, 42, found a package from 1969 tucked behind its fireplace, The Sun reported. Inside the parcel were old Birmingham Evening Mail newspapers from that year as well as […] 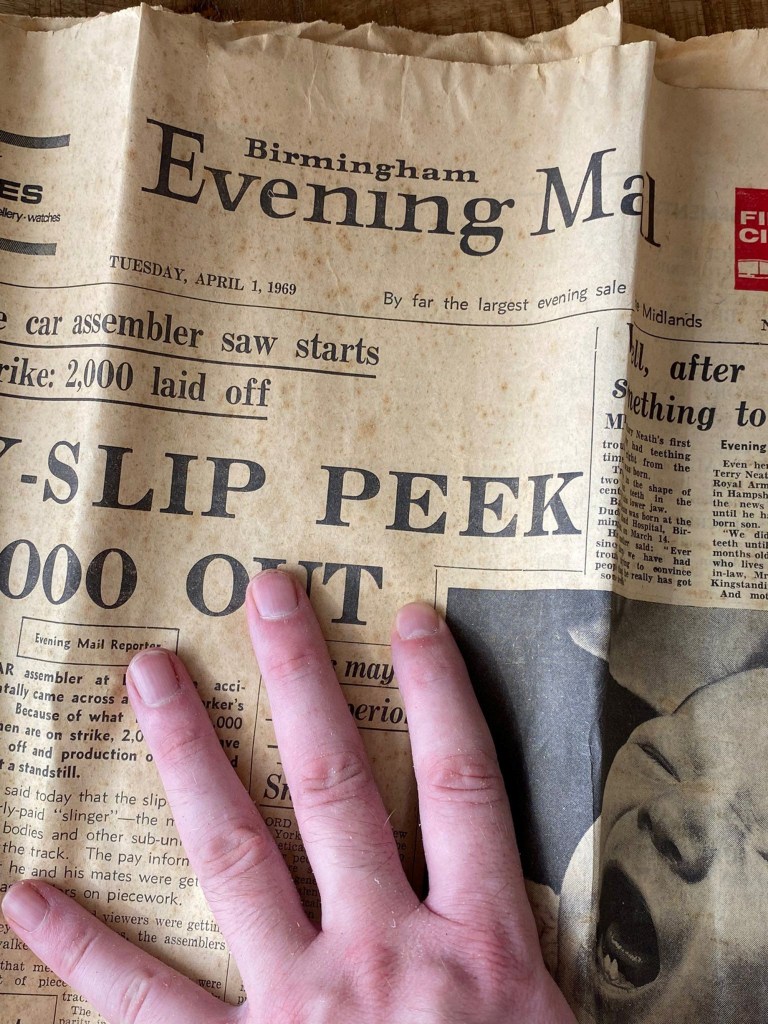